a lack of character

Everything that follows is a result of what you see here. • 20 August 2022 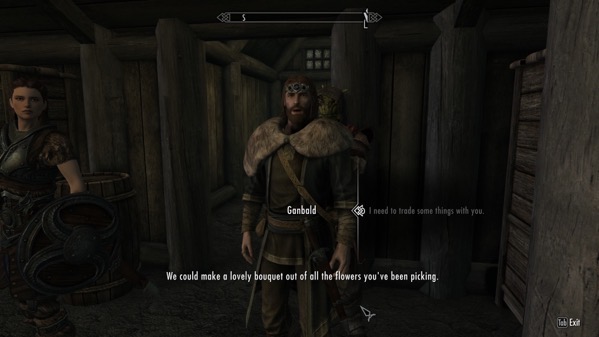 Since the release of Skyrim Anniversary Edition back in November, I’ve been playing a lot of Skyrim again. To make Skyrim feel properly new again, I also added a number of custom-voiced follower mods to my load order, including Inigo, Lucien, Auri, Remiel, Xelzaz, and Thogra. I’d tried Inigo and Lucien before, and bounced off of both, but a lot of people swear by them. What the hell, I figured—they’re just followers. Worst case, I dismiss them and I continue my Skyrim adventure without them.

Long story short: they’re good. They’re really good. Whatever their effect on game difficulty—which was never really what I played Skyrim for, personally—these followers all have a level of personality to them that makes it hard to dismiss them. Beyond that, they comment on things like your current location and quest. Even more impressively, they talk to each other! When Inigo needles Lucien by calling him “Julian”, or Xelzaz gives Remiel a new drink to try when the party stops by an inn, it makes the world feel that much more real—or, in the parlance of Skyrim modding as a whole, “immersive”. What was once a solo gaming exerience is now a seven-person adventuring party, complete with bickering, flirting, and friendships that grow and change over time.

So it was probably inevitable that I looked at these mods and thought: “Hey, I could do that.” What’s less inevitable, given my history with projects like this, is that I’ve actually implemented my follower in the Creation Kit, bringing him roughly up to par with Skyrim’s vanilla followers, like Lydia. I’m continuing to work on him when I have some downtime, and I plan to get him ready for a 1.0 release on the Nexus before the end of this year.

Ganbald is a very Nord-y sort of wizard, or perhaps a very wizard-y sort of Nord, who lost his home at the same time the Dragonborn nearly lost their head. For 1.0, he’ll have a lot to say about the world at large, but especially about Skyrim’s main questline, the College of Winterhold questline, and some of the most popular other follower mods already out there. He’ll also have a lore friendly summoning solution, making sure you can take him anywhere your adventures take you.

I look forward to sharing some initial feature-incomplete test releases over the next few weeks! I can’t wait to get Ganbald into the hands of other players. 🧙‍♂️